The Serengeti in Tanzania and Masai Mara in Kenya form the backdrop to one of the most spectacular shows on earth; the Great Wildebeest Migration.

Every year, over 1.5 million of wildebeest, zebra, and gazelle move across the plains of Tanzania and Kenya in search of fresh grazing, water, and breeding grounds. Guided by survival instinct, each wildebeest will cover from 800 to 1000km on its individual journey along age-old migration routes. With many predators close at hand- lion, leopard, cheetah, hyena, wild dog and crocs, this is a circle of life and death that fascinates every safari traveller. 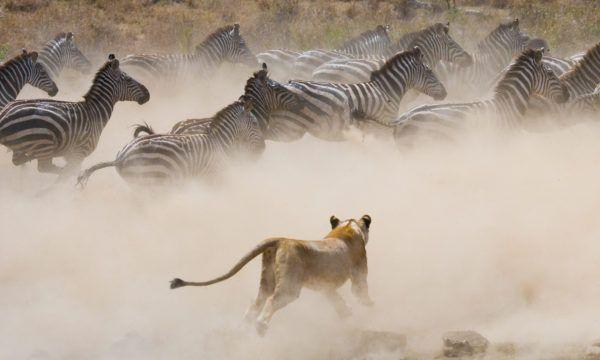 Since this move is an annual pattern it is fairly predictable. The wildebeests migrate throughout the year on a circuit that takes them from the Ngongorogoro Conservation Area in Tanzania, up through the Serengeti Park and across into the Masai Mara, and back again seeking fresh grass and water. The precise timing of the wildebeest migration is solely dependent upon the rainfall patterns each year – here we explain how the broad wildebeest migration circuit works.

Between January and March, the Wildebeests stay within the southern part of the Serengeti Park, Ndutu region, and Ngorongoro Conservation Area.  Most wildebeest calves are born in a short window around February. The southern part of the Serengeti has short grass, so wildebeest prefer to calve here, without fear of predators who are ready to hunt the weak and vulnerable members of the herds.

In April the herds start moving towards the North of the Serengeti National Park.  As the calves mature, the herds cover greater distances each day. The wildebeest can cover from 40 up to 150km a day, reaching central and Western Serengeti around June. During this time most of the grass is gone. As the Serengeti starts to dry up, the herds follow the Grumeti River to the west.

By June the Grumeti River is low, often leaving crocodile infested pools as the only water source in the area. They prepare themselves for the toughest part of the journey further North crossing rivers towards Masai Mara – Kenya. If you’re lucky, you may witness three or four high-drama crossings when the frantic herds cross the river in panic and confusion, dodging the waiting crocodiles in one day. They team up with herds from the Loita migration of the eastern Loita Plains. By September most of the herd can be found in Masai Mara which is now filled with great wildlife spectacles. The abundant local wildlife only enhances the overall experience, and this is an excellent time of year to be in Kenya 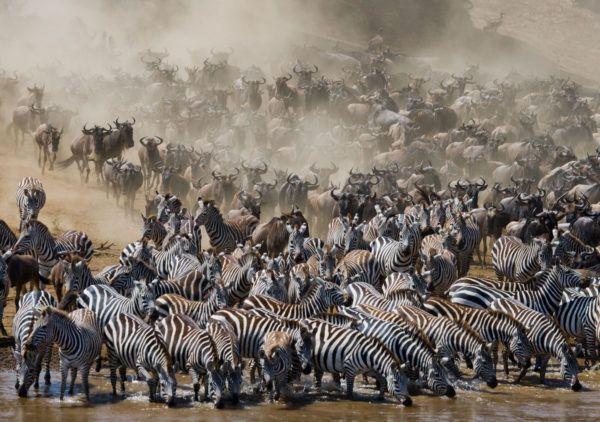 At the beginning of October, the wildebeests are still at Masai Mara but they are expected to start migrating again heading south, through western Loliondo and into Serengeti National Park in Tanzania during November and December where the grass should be greener. In January this cycle of life starts repeating itself all over again.

How can I see the Migration?

To see the migration, you’ll need to carefully plan your visit. All our camps are strategically located in the Masai Mara vicinity to enable you to experience the great wildebeest’s migration. Click on our safari camps to get your accommodation right, and to ensure you’re in the right place at the right time to witness this once-in-a-lifetime event.

Come and witness the Great Wildebeest Migration by joining in our migration safaris.